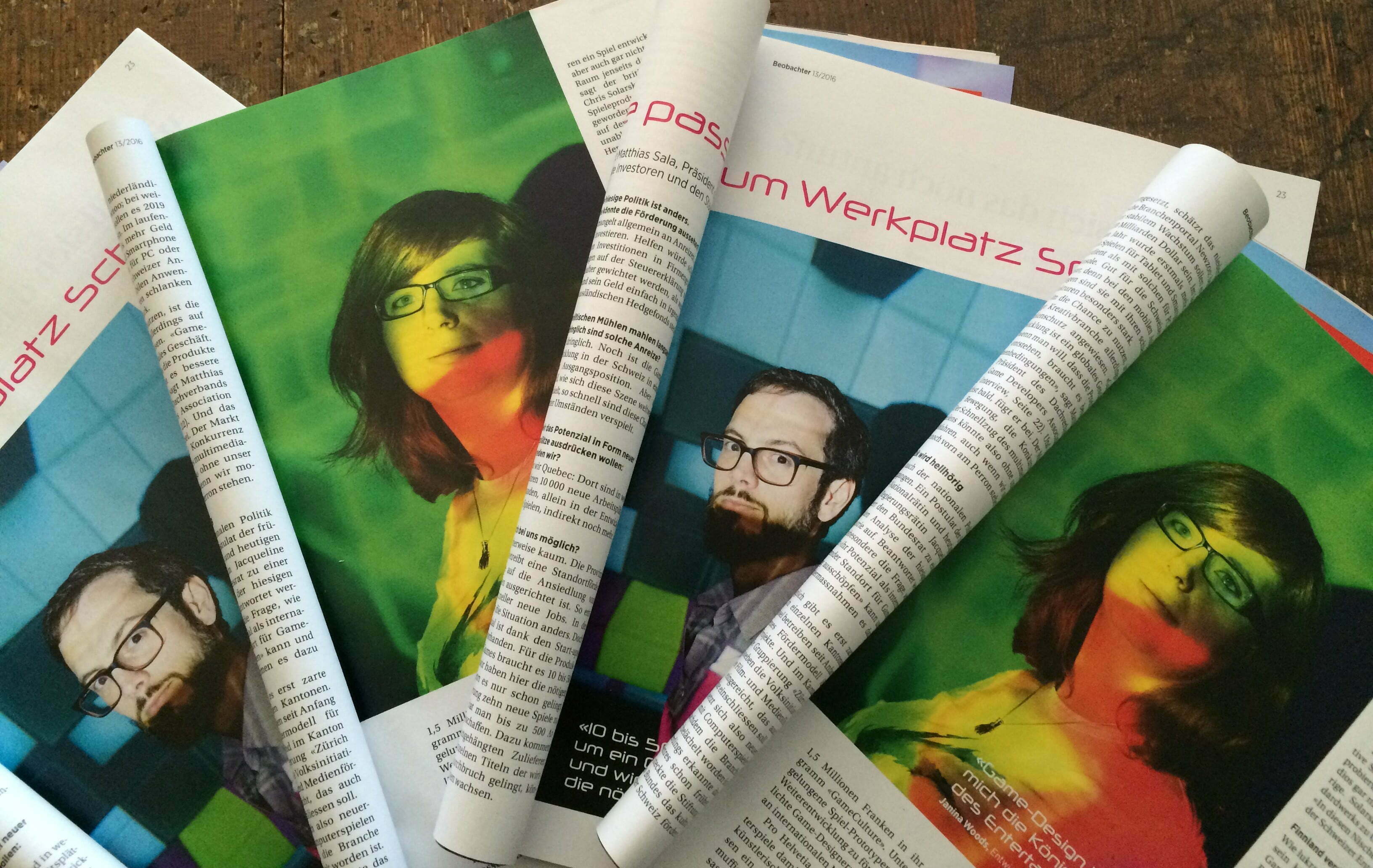 In his function as SGDA’s president, Matthias Sala has been interviewed by the Swiss magazine Beobachter. As you might have guessed, the talk was about games, and he’s been asked to illustrate the numerous challenges game developers face in Switzerland.

His take on the subject is that games fit the Swiss economic space and that the game industry can create jobs in Switzerland, but it still needs help from private investors and the government.

Why should someone invest in games? According to Matthias Sala, because we live in a society which is consuming more and more entertainment products, especially games. They can be produced locally with limited costs, and sold worldwide in digital form. The product of game development is scalable and can be sold indefinitely.

So the investors are standing in line to throw money at the developers? Unfortunately not, says Matthias Sala. Only a small part of the budget of most Swiss game studios is funded by investors. Around two thirds of their budgets consist of private capital and funds gained through contract work.

What are the reasons for this situation? We don’t have a distinct entertainment industry in Switzerland. Therefore, there aren’t many investors who have made money with it, and who can serve as examples of success for others to follow.

What does the sector need more money for? Mainly for marketing activities. Every day over 1’000 new games are released worldwide. Only the ones which can stand out from the crowd can be successful. But gaining the gamers’ attention is both time-consuming and expensive. Good publicity and networking at exhibitions and conferences are of paramount importance.

The game industry has finally attracted political attention in Switzerland. Why should the government exert influence on it? Games fit Switzerland’s economic space. The production is high-tech and interdisciplinary, with many professions taking part in the process. That’s what we’ve always done, that’s what we’re good at. Therefore, we believe that not only private investors should support this new sector, but so should the government. Game development is a global business, and if we want the products to be made here, we need better business conditions – while the reality we are facing now is that there are none.

You are painting a dark picture. Take a look at Québec: the Canadian province and Switzerland share about the same number of inhabitants. Yet in Québec there are tax breaks for game developers, which have turned the region into one of the world’s most attractive hubs for game companies. Moreover, when a company creates a new job, the government pays for a second one. That’s quite a tough competition for the Swiss market.

But local policy is different. How should the facilitation of the Swiss game industry work? There’s a clear lack of incentives to invest in a game company in Switzerland. If investments in company foundations would be assessed lower for taxation purposes than investments in a hedge fund abroad, it would definitely help.

Political change is slow. How pressing is the need to install such incentives? It’s a very pressing issue, argues Matthias Sala. Game development in Switzerland has a good starting position, but the global market is growing at an incredible pace, and we could lose this vantage point fast.

How many jobs could potentially be created in Switzerland? Let’s go back to Québec: in just a few years about 10’000 jobs have been created in game development alone, not counting jobs in related fields.

Would the same scenario be possible in Switzerland? I don’t think it’s realistic, says Matthias Sala. The situation in Switzerland differs from the one in the province of Québec, which tries to attract big companies, which in turn create more jobs. In Switzerland, the potential lies in the many great startups we have. Around 10 to 50 people are needed for the production of a game, and we have more than enough talent in our country. If only we could make 10 new games with the help from investors or the government, we could create up to 500 jobs. And this number could be even higher when we think of all the suppliers involved in the production process. If some of these games would be successful, the companies could grow further.

Politicians of advanced age need to talk about the young game industry. Can this work? There’s still a lot of explaining to do. Games are very diverse products. They are technology, art, movie, animation, and music all rolled into one. Or they may simply stand for innovation. The step onto the political stage offers the opportunity to scrutinize all these aspects in an official setting. And we, the game developers, can now discuss games in the public space.

Games have long been thematically tied to shooters. Does the gaming scene have an image problem? It’s getting better, says Matthias Sala. When I founded my own game company in 2007 one bank bluntly stated: “What are you thinking? We don’t do such things!”. After smartphone apps started to become ubiquitous the mindset changed, and people realized that you could actually make money in this sector.

But still, gaming has a leisurely vibe to it. It doesn’t sound like serious work. Often the characteristics of the finished product are mistakenly blended into the reality of the production process. Many people think that we are professional game players. Truth is, we are professional game makers and creators, and try to use the medium in meaningful ways. There’s the category of games called serious games. They are often used in medicine, science or education.